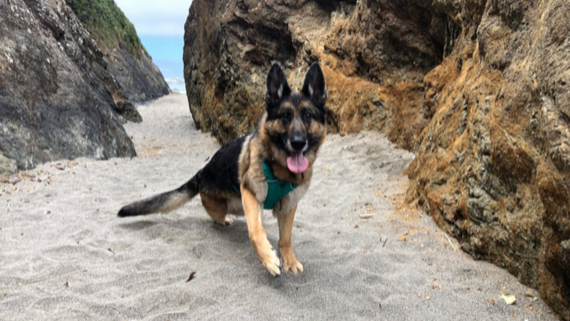 Wyatt Ray is a ten-year-old Tripawd who lost his leg to neglect by a previous human. He’s been on three legs since he was eight months old. We like to joke that if Wyatt had all four limbs, he would be real trouble because he’s already quite a handful!

Seriously though, it’s been such a learning experience with this guy. As spokesdog for our animal amputee support community, Tripawds.com, Wyatt benefits from all that we learn from veterinary professionals we interview for our community. From orthopedic surgeons to rehabilitation therapy experts, they’ve all helped us raise a strong, lively three-legged German Shepherd.

Twice yearly wellness / orthopedic checks and ongoing rehabilitation therapy have been part of his life for years, and it’s paid off: he’s stayed so strong that only this year did he begin to need a cart for longer walks.

Wyatt has hip dysplasia as well as arthritis and tendonitis in his tarsus. That is slowing him down, but we ease the pain with daily pain management, strict weight control, and gentle therapy exercises prescribed by the awesome animal rehab team at Colorado State University.

Managing canine arthritis takes work, money, and dedication, but it’s worth it for this guy. He rules our world and we love him all the more for it.

Want your dog to be featured on CARE? Fill out the form below!

Dog of the Month Submission