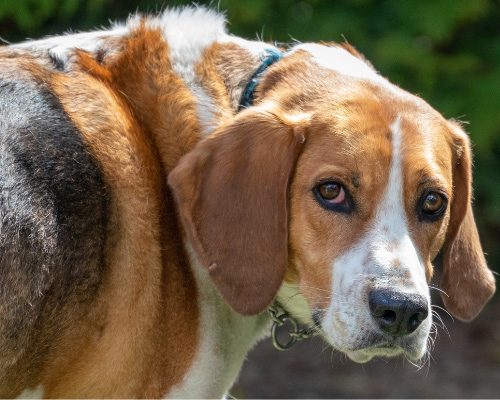 Maintaining a healthy weight and lean body condition are some of the best ways you can help manage your dog’s pain and lameness. Regular exercise is important, especially if your dog has arthritis, but most of your weight loss efforts should focus on calorie restriction.

Here are a few studies that show how cutting calories can make a positive difference in how your dog feels.

Cutting calories can reduce arthritis symptoms, even with as little as 6% weight loss. In one study, dogs who were at least 20% overweight and had elbow or hip arthritis were put on a calorie-restricted diet for 18 weeks. During the study, none of the dogs were allowed to have NSAIDs and didn’t change their activity levels. The study found improvements in lameness after just 4 weeks. By six weeks, the dogs’ lameness had improved by nearly 50%, with an 80% improvement by the end of the study. Marshall W et al. VCOT 2009

A study of dogs with hip arthritis found significant improvements in lameness when they lost between 11% – 18% of their body weight. The dogs were placed on a diet with calorie requirements of 60% of their weight when they started the study. The dogs did not receive any pain medications or supplements and didn’t and change their exercise routines. Impellizeri JA et al. JAVMA 2006

One long-term study divided Labrador retriever puppies that were genetically predisposed to hip dysplasia into 2 groups. The first group was fed a restricted diet to maintain a BCS of 4.5. The other group was fed 25% more calories and had a BCS around 6.5.

The dogs in the calorie-restricted group had radiographic signs of arthritis at 12 years of age, while the dogs who ate more showed the same signs at 6 years old. In addition to taking twice as long for arthritis to show in their hips, the dogs that had a calorie-restricted diet lived an average of two years longer! That’s a lot of extra quality time with your dog! Kealy RD et al. JAVMA 2002