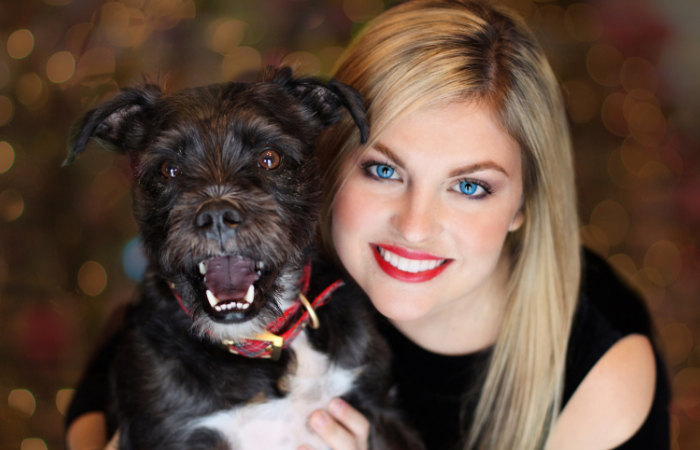 Historically it was thought that dogs with arthritis should limit their activity, and “exercise restriction” was prescribed. It turns out this recommendation is incorrect and if strictly followed, would contribute to your dog gaining weight, having stiff joints, losing muscle, and experiencing a decline in their functional abilities.

When people have arthritis of the knees and hips, exercises including progressive resistance training, quadriceps strengthening, aquatic exercise, land-based exercise such as walking, and aerobics have all been found to decrease pain and help with weight loss, which also helps to reduce joint pain. In fact, the benefit of walking was shown to be similar to that of NSAIDs!

The American College of Rheumatology recommends aerobic exercise, muscle strengthening and preservation of joint mobility as key components of managing arthritis naturally.  These recommendations are also true for dogs with arthritis!

The best recommendation for dogs with arthritis is “exercise modification.” This means dogs SHOULD exercise, in fact, they should ideally do something every single day rather than be weekend warriors.

The ideal exercise program for dogs with arthritis is one that is regular, low-impact, and controlled. 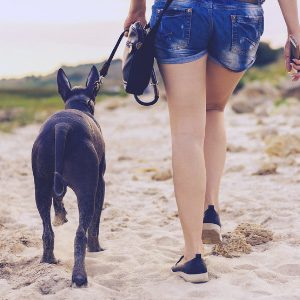 Regular exercise means your dog is going for walks most days, rather than doing one big activity at the end of the week.

A study by Greene LM, et al in 20213 found that dogs with hip arthritis that exercised for >60 minutes/ day had lower lameness scores than dogs that exercised <20 minutes/day.  Interestingly, in this same study, the administration of NSAIDs or chondroprotective agents was not associated with improved lameness scores. This supports the recommendation of an active lifestyle for dogs with hip dysplasia and arthritis. Similar studies have not yet been published for other forms of canine arthritis.

The type of exercise the dog is participating is important. This is where  “low-impact” and “controlled” come in. To best describe this recommendation, we turn to physics (sorry, but it is easy physics!).

A simple formula for how to reduce impact

A simple formula from physics states that Force = Mass x Acceleration. We want to reduce the Force on dogs’ arthritic joints, so we do that by decreasing Mass and Acceleration. 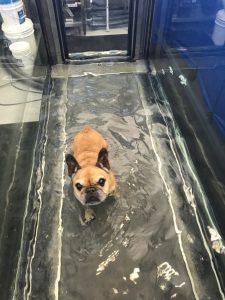 Decreasing Mass, or body weight, means losing weight or maintaining a lean body condition. Another way to effectively decrease mass during exercise is by using water. The buoyancy of water decreases the amount of weight placed on the joints.

For example, if a dog is exercising in an underwater treadmill with the water at the level of the hip, the joints have 38% less weight on them then they do on land. (Ref: Levine D, et al, 2010).

If the water level is lower, the effective reduction in body weight will be less. Swimming and underwater treadmill therapy are great, low-impact ways for dogs with arthritis to exercise. This kind of exercise also helps them gain muscular and cardiovascular strength and improve limb range of motion.

The other important way to decrease Force on the joints is by decreasing Acceleration. Without getting into more physics, this is essentially how quickly force is applied to a joint.

The 3rd recommendation for exercise is controlled. Playing at the dog park would be an example of uncontrolled exercise! When dogs play at the dog park, they are often running, jumping, twisting and turning quickly and placing abnormal forces on their joints. If they have abnormal joints, that is, developmental orthopedic disease or arthritis, these abnormal forces on their joints can be significant and often results in lameness.

However, some dogs live for the dog park, to chase balls, or run in the snow. To take away their favorite form of activity may decrease their quality of life, even if it is the best medical recommendation for their arthritis.

Talk to your veterinarian about modifying your dog’s activity!

In summary, the best medical recommendation for dogs with arthritis is that they should exercise regularly, ideally 30-60 minutes every day, and not engage in high-impact activities such as running, jumping and rough play. But, you do have to factor in your dog’s quality of life as well. For example, if you have a puppy with a developmental orthopedic disease, such as hip or elbow dysplasia, they still need to socialize with other dogs and people in order for them to develop appropriate social skills.

Activities not recommended for dogs with arthritis

CARE does not recommend the following activities for dogs with arthritis:

There are numerous other canine sports that involve varying degrees of jumping, running and explosive activity. In general, these sports would put increased force on the joints of dogs and CARE does not typically recommend them.

Activities that are GOOD for dogs with arthritis: